After founding the company in January 2014, benel Solutions has slowly been leading up to exhibiting and appropriately staffing a booth at ASAE’s Annual Conference and Expo, and 2016 was the year! 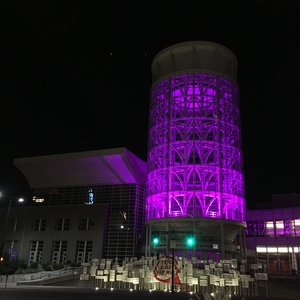 In August 2016, after attending and exhibiting at countless industry events while also growing the company, customer base, and list of integration partners, benel Solutions joined Abila on what they called “Association Avenue”: a preferred string of Abila partners expertly positioned across from the Abila booth at the convention center in Salt Lake City, Utah.  This strategy allowed Abila’s closest partners a little extra exposure and face time with their shared customers. The “Avenue” included a variety of Abila partners that complement their business and products, creating a thriving eco-system of both product- and service-oriented companies around the Abila product portfolio. benel Solutions is not exclusively an Abila service provider, but admits that more than half of the company’s business is specific to Abila’s flagship product, netFORUM Enterprise, which boasts some of the largest associations and nonprofits from across the country as long-time users of the web-based Association Management System.

benel Solutions had four individuals in attendance, including the two co-founders, Benjamin Muscolino and El Mehdi Marhoum, their Marketing Associate, Jen Klemens, who is the latest addition to the team, and their dedicated Account Manager, Cynthia De Jesus, whom has become a conference regular over the past 16 months. 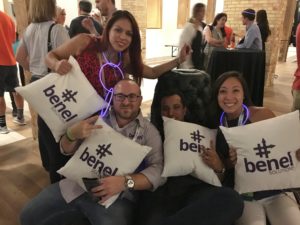 In addition to exhibiting at #ASAE16 in Salt Lake, benel Solutions teamed up with some other partners and friendly faces in the association market to co-host a party which, in the absence of the always anticipated MultiView party, ended up being one of the “talks of the town”, or the talk of the show as it may be in this case.  Long time benel Solutions partners ranging from CQ Roll Call, Higher Logic, Expo Logic, and Informz to friends by association (pardon the pun), such as mindSHIFT, all decided to come together for a VIP party which was planned in advance by these groups, but mainly coordinated by the marketing team at Higher Logic (thanks guys!). 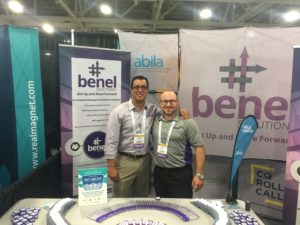 In the end, benel Solutions had a great showing at #ASAE16 with a booth that was humming with activity all the way through and beyond the allotted exhibit show hours, partners and customers touting their affiliation with the young services company anywhere you could find people, and an event that not only garnered some great data of attendees at the show but also showcased the commitment of benel Solutions and their friend companies to this market, all with the real understanding that this business is all about relationships.  This co-hosted party wasn’t about staying up late or drinking too many sodas, it was always about giving back to an industry that gives so much to them, and providing a place for their customers and other partners to network outside of sessions and reflect on the learning and inspiration that is always happening to and around them at ASAE’s staple annual conference.

Thank you for taking a moment to hear about the great showing from the purple wearing association enthusiasts at benel Solutions. We can’t wait to see everyone in Toronto next year!

With combined decades of software and technology industry experience, benel Solutions is comprised of a team of passionate individuals motivated by innovation and collaboration. The mission of benel Solutions is to empower clients and partners to realize their vision through technology and exceed their business goals. benel Solutions has quickly emerged as a market leader and top IT consulting firm and systems integrator in verticals ranging from government to small businesses, with a specialty for associations and nonprofits.

Page load link
We use cookies on our website to give you the most relevant experience by remembering your preferences and repeat visits. By clicking “Accept”, you consent to the use of ALL the cookies.
Cookie settingsACCEPT
Manage consent

This website uses cookies to improve your experience while you navigate through the website. Out of these, the cookies that are categorized as necessary are stored on your browser as they are essential for the working of basic functionalities of the website. We also use third-party cookies that help us analyze and understand how you use this website. These cookies will be stored in your browser only with your consent. You also have the option to opt-out of these cookies. But opting out of some of these cookies may affect your browsing experience.
Necessary Always Enabled
Necessary cookies are absolutely essential for the website to function properly. These cookies ensure basic functionalities and security features of the website, anonymously.
Functional
Functional cookies help to perform certain functionalities like sharing the content of the website on social media platforms, collect feedbacks, and other third-party features.
Performance
Performance cookies are used to understand and analyze the key performance indexes of the website which helps in delivering a better user experience for the visitors.
Analytics
Analytical cookies are used to understand how visitors interact with the website. These cookies help provide information on metrics the number of visitors, bounce rate, traffic source, etc.
Advertisement
Advertisement cookies are used to provide visitors with relevant ads and marketing campaigns. These cookies track visitors across websites and collect information to provide customized ads.
Others
Other uncategorized cookies are those that are being analyzed and have not been classified into a category as yet.
SAVE & ACCEPT
Go to Top